Shortly after the war in Nicaragua, Winnie and I started working in the garbage dump of Managua, Nicaragua.   Although we are a Christian missionary couple, we work with anyone who is willing to roll up their sleeves.  We help the children growing up in the poorest parts of Managua, Nicaragua, the capital of the second poorest country in the Western Hemisphere.

We work predominately in the garbage dump of Managua, known as La Chureca.   A lot has changed since we first started there.  Unfortunately other things have not.  We are serving our third generation of the same families in the same feeding center.   In other words, we are feeding grandchildren and great grandchildren of the same kids that we served over three decades ago.  Although we cannot enter La Chureca itself anymore, as you will read later on, the families and the workers live in Via Guandelupe bordering the city’s garbage dump.  The dump itself was bought by investors.  The adults in some of the families work there.  In return they get paid a paltry wage and have a house to live in.

This work is a compilation of the gleanings I have gathered as I have worked with these children and their famlies.  God has placed my family here because He knew how things would work out.    Winnie and I love the people we work with and love God for His infinite mercy and wisdom. Mostly we love God because He gleaned us from this world.  We hope to please Him with our humble offering of work and love for the children and otherswho are having trouble.  As we ourselves have been gleaned we hope to glean lives.  And not just lives,, but glean the wisdom of the ages as we see people overcomehorrible situations and trials beyond anything I could have ever imagined.

How our work began...

Napoleon Villalta and our FIRST TRIP INTO THE DUMP!

Just after the Contra wars in Nicaragua, Winnie and I had some toys to give to kids in Managua.   We were giving  presents to  the kids in the Managuan churches but they were already getting lots of gifts.   We were getting pretty disappointed.  Someone said, ‘ You should go to the garbage dump, no one goes there to give stuff away’ so we decided to visit.  We were surprised to find a thriving community of about 250 families there.  We were told by others not to go because there were no roads, only mud and decades of sharp metal objects buried underneath. We were told that the gangs there were ferocious.  At that time there were not ministries there, nor any one even going in there that we knew of.

I whistled down a taxi driver.  *actually Winnie whistled, I don’t know how to whistle like that,, much to my shame*.   His name was Napoleon Villarta.  Napoleon was a sniper during the war.  When he saw me, he said to himself ‘this big fat yankee would have been an easy target during the war.’  He was kind of surly to us.  When we asked him to take us to the dump, he got angry and called us crazy.  He almost drove off. I said, ‘you’re supposed to be a commie,, you should love and help the poor’. He reluctantly agreed,and charged us big time for his services.  When we got to the dump, we were stampeded.  AND we got stuck in the mud.  It was mighty bleak there for a moment, and Napoleon

was GLARING at us.

After we had given everything we had away, the happy garbage dump kids helped push us out of the reeking, stinking, burning mud with huge billows of gut-wrenching smoke typical of a garbage dump.  I remember seeing thousands of buzzards, a man cleaning a buzzard he had just killed to eat, the pungent smell of burning decaying garbage and death.  I also remember hundreds of ecstatic parents and children, and most importantly, Napoleon accepting Jesus into his heart that day.  Napoleon is now a leader in OANSA Nicaragua *AWANA USA* and a member of Verbo Church 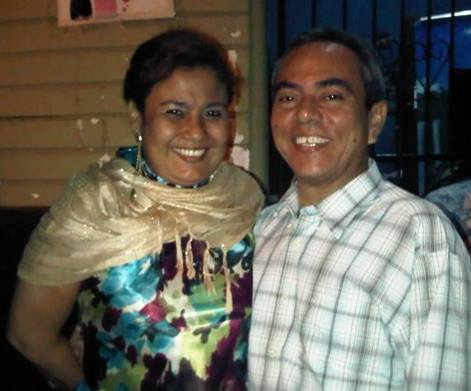 Napoleon Villalta and his wife Glorida in this picture

Our hearts have been with the ‘diamonds’ we have gleaned there ever since.

Don’t listen to the world. Not even to the well meaning people.  They will tell you not to go.  They will tell you that there are giants and monsters there.   You will miss the blessings of God.  People there are waiting for you to come.  If you listen to the negative people, you will miss a blessing, and other’s will miss a blessing as well. NAPO’S LIFE WAS CHANGED FROM HATRED AND WAR TO LOVE AND PEACE.

“lord, help me to listen to you and not to others.  Help me to be a conduit of love to go where you are not being thought of nor considered.  Thank you for your love and salvation, not only for me, but for others…. amen”